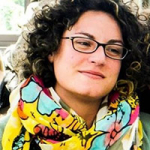 Cinzia Toscano is PhD in Visual, Performative and Media Arts. She mainly deals with contemporary Japanese theatre, with particular attention to theatre and new technologies. She also deals with contemporary puppets theatre. Since 2014 she has been member of the editorial board of the journal “Antropologia e Teatro” and from 2018 she has been part of the multidisciplinary research group “Performing robots” in the University of Bologna. In 2019 she published the book The Robot Theatre. The mechanics of emotions in the Robot-Human Theatre by Hirata Oriza (ed. Clueb).

Taknobu Chikaraishi is a Roboticist, Founder of Reiwa-Kogei LLC. and Associate Professor at Tokyo University of the Arts. He is interested in applying the robotics to the art works. In 2010, when he was student of Engineering at Osaka University, joined to "Human- Robot Theater Project" established by Hiroshi Ishiguro and Oriza Hirata and started his career in art field, the theater work "Sayonara" has been played over 200 stages in 20 countries. In 2021 March, he has established a robot venture company to make robot with art, especially with kogei (traditional style of handcraft). 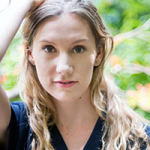 Currently based in Los Angeles. Since 2010 Bryerly Long has been a member of the Seinendan Theatre Company, known for its “contemporary colloquial” theatre style, and performed in international tours. Her film debut was in Fukada Koji’s “Hospitalité”. She co-starred with an android robot in the feature film “Sayonara”, in which she displayed a “unique quality of restraint” (The Telegraph) and “eeriness” (The Society for Film), acting the role of a dying girl “to chill and poignant perfection” (Japan Times) and “bonding convincingly with her inanimate co-star” (JT). She has been praised for her stage presence, capacity to switch with ease between various languages and strong physical impersonation of characters (Nikkei Shinbun Newspaper, November 2012).
More info: https://www.bryerlylong.com/